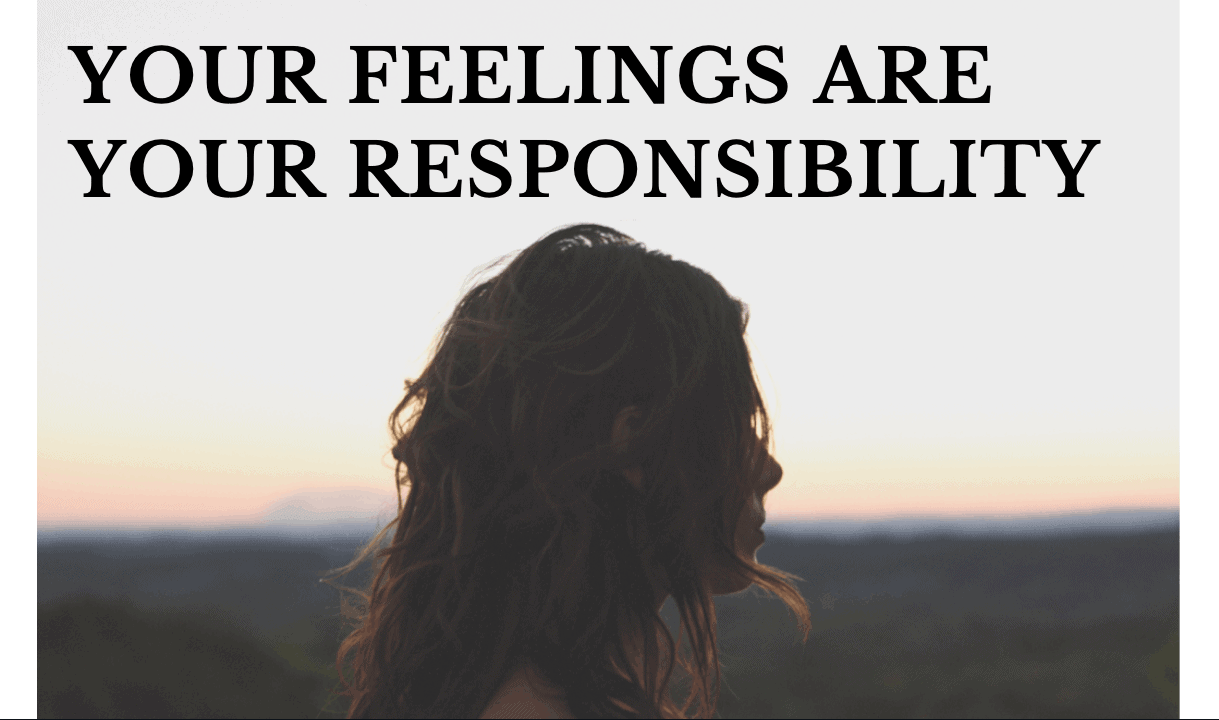 Your Feelings Are Your Responsibilty

I thought this mentality was an indication that my marriage was number one. I made my interaction with my husband mean so much that it affected my day-to-day well-being and contentment. He was my everything, and I told him so.

It makes for good books and movies, but as it turned out, when I put my emotional state into the hands of my husband, I abdicated control of my feelings. I made him responsible for my happiness and, equally, my misery.

I had no idea I was doing it wrong.

My husband and I had the inevitable struggles that it seems all couples have. But, it got pretty bad for us.  We sought marriage counselling several times.

At counselling, we were told to learn our spouse’s needs, and then to meet the need.

Ugh!  We tried!  I made sure he knew my needs, and then I made sure to let him know when he failed to meet them. And vice versa.

This led us deeper and deeper into resentment and misery.

I made him responsible for making me happy.

I made him responsible for my sadness and frustration.

I made him responsible for all of my feelings.

And so it just makes sense that I would then try to control him. I desperately wanted to inspire him to act in ways that would produce the feelings I wanted to feel.

I regularly told him what to do and not do. I was mad, hurt, sad, or frustrated when he didn’t comply. Obviously, he was sending me the message that he didn’t care. Right? And this story justified my further attempts to control.

My feelings went up and down with the words and actions of my husband. I used to tell him I felt like our marriage was an out-of-control roller coaster and that I wanted off.  And I blamed him.

I told him he was he problem. And he did the same to me.

We were headed for divorce.

I was miserable and dove into the world of self-help. Something finally clicked. I need to stop blaming my husband and take responsibility for my own feelings.

I no longer needed him to behave a certain way so I could feel better.

I stepped up to the plate and realized I was the only one who could help me feel better.

I had been feeling miserable and that was on me.

The truth is, the only reason we ever feel anything is because of a physical response to the thoughts we are having in our head.

Do you believe me?

How about this? I learned two months after I left a job that my boss thought I had lied to her. When I found out, I immediately felt a wave of disappointment. I was baffled why she would think that. I thought we had a trusting relationship. I learned I was wrong.

Think about it though. She thought I was lying while I was still at the job. I just never knew it. She was thinking it but I didn’t feel the disappointment. I only felt disappointed when I learned she thought this. Then my brain produced thoughts about the situation.

My boss did not make me feel disappointed. If she did, I would have felt it right away. I only felt disappointment after she was out of my life and I had thoughts about her.

Awesome news!!!  You have the power to change how you feel. Who better to manage your emotions than you anyway?

The other person is off the hook. No need to try to change or control them. What a relief.

I’ll give you the first step in the process of taking responsibility for your feelings.  Here it is.

Start watching your brain. The first step is awareness.

Go be aware of your brain and start taking responsibility for your own feelings.

If you liked this article, be sure to check out Know What You Are Feeling.